So I woke up the other day to this piece of news going round:

I was upset by that headline, but I thought, “Let me read the article first before I start to vex.”

I just ended up more vexed.

Here’s the gist of it, if you haven’t clicked the link yet. There’s this group (headed by a doctor no less!), that has been calling for the disqualification of Akinwunmi Ambode from the Lagos State governorship race on account of his “history of mental illness.” (Unsurprisingly, it falls into the common error, which I’ve written about before, of implying that all mental illness is one type.)

There’s a lot wrong with this.

But first, let me be very clear: this is not about Ambode or any of the political parties. And even though his media team have strongly denied the allegations, it’s not even about whether he actually has a mental illness or not. That’s not really my concern here.

No, my concern is with what the allegations mean for mental illness itself, here in Nigeria, and for the millions of people who live with it, in themselves and in those they love.

I’m upset that the issue even came up at all. Whether it is true or not (and I really do not care), there is absolutely NO reason for it to have come up, and most definitely not as a basis to disqualify anybody. I’m as upset about it as someone might be if their father was brought in an argument about something entirely disconnected! Stick to the argument, and leave fathers out!

What the constitution says about mental illness and leadership

Let me calm down and start with the relevant sections of the Nigerian constitution (the phrasing is the same for disqualifications both governorship and the presidency). Emphases are mine:

182. (1) No person shall be qualified for election to the office of Governor of a State if –

(a) subject to the provisions of section 28 of this Constitution, he has voluntarily acquired the citizenship of a country other than Nigeria or, except in such cases as may be prescribed by the National Assembly, he has made a declaration of allegiance to such other country; or

(b) he has been elected to such office at any two previous elections; or

(c) under the law in any part of Nigeria, he is adjudged to be a lunatic or otherwise declared to be of unsound mind…

(Kindly ignore the antiquity of the phrasing for now. I’ll only note that words like “lunatic” — were acceptable back when the constitution was first formulated, but not in this day and age — are part of what the proposed Mental Health Act aims to change.)

My point here is that the constitution, in addressing disqualification from leadership based on the state of a candidate’s mind, focuses on the present tense. And this is a key point. Medically, to be “lunatic” or “of unsound mind” is absolutely not the same as to have had a history of either. (Even if the issue were to be argued in court, a psychiatrist would have to be called in as expert witness.)

That’s by way of laying a foundation.

Please, please, don’t take us back

Now, here is my main problem with all of this: whether or not the people behind it realise it (yes, I’m willing to be charitable enough to consider that they may know not what they do), the whole thing threatens to erode what little territory has been won for mental health in this country.

To understand why, you need to remember that we already have many beliefs about mental illness that are wrong but culturally backed. One of them that’s particularly important here, is expressed in Yoruba as, “Were o n tan l’ara.” (For the non-Yoruba reader, that’s best understood in its pidgin translation: “Craze no dey finish for body.” In regular English, I’d translate it best as, “Once mad, always mad.”)

My problem with the allegation is that it, without saying it in so many words, subtly reinforces this belief. And it’s a wrong belief. But it’s not just a wrong belief: it’s a stigmatising one. The belief is an indictment on every single person being treated for a mental disorder. And while the public busies itself with arguing whether or not Mr Ambode has such a history, most people are unlikely to question the belief itself.

And challenging that belief is my entire goal in this post (and a major one on this blog).

Because it simply is not true.

It’s not true because there are many different kinds of mental disorder, including behavioural disorders, which don’t necessarily affect judgement in general. In fact, many people with mental disorders are able to maintain function for years, and even those around them question that something is actually wrong.

It’s not true because many people who have a mental disorder have only one episode (take depression, for instance, where just over half have a repeat episode).

It’s not true because even in those who do have repeat episodes, recovery is possible through various means (including medications and talk therapy) so that they are able to carry on with their lives. [ctt title=”Churchill & Lincoln achieved greatness despite depression!” tweet=””Mental illness is not the end. Churchill & Lincoln achieved greatness despite depression.” http://ctt.ec/2b6f8+ via DocAyomide #RISEAboveIt!” coverup=”2b6f8″]

It’s not true because two of history’s most acclaimed national leaders, Winston Churchill and Abraham Lincoln, struggled for years (including during their leadership) with depression. (Churchill even had a name for his: he called it his “Black Dog.”) 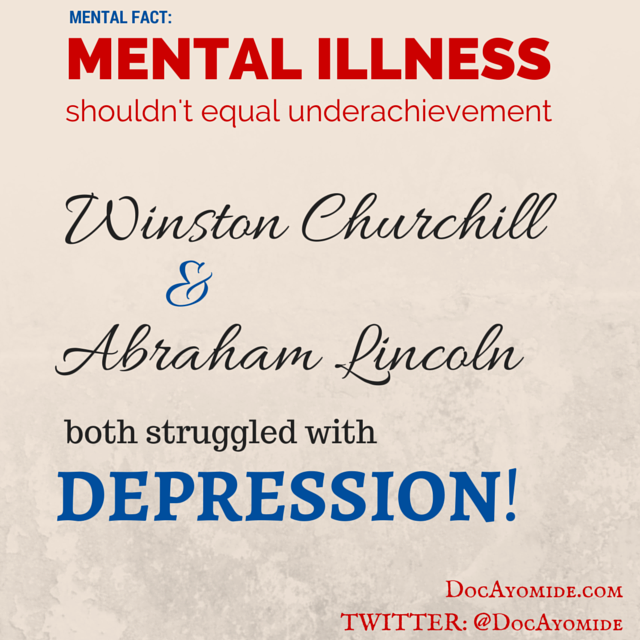 It’s not true because I see people everyday that you wouldn’t believe were seeing me. That’s how well they are doing. I’ve seen people with mental illness finish school, get married, have and raise kids, pursue their careers and achieve their life goals.

Yes, some do not recover fully (as is the case in every single medical field) but many do. And among those who don’t, the belief that they won’t is itself a reason.

After all, if you don’t expect a person to recover, you simply won’t try too hard, will you?

If you want to be part of the change, here’s one way to start: if this resonates with you at all, please share.