(Scroll to the end of this post to get a link to a FREE online self-test to help you decide if you or someone you love might need to see a doctor about possibility of having bipolar disorder. You’ll also find a link to a printable PDF that goes into more detail.)

Let’s start from what bipolar is not.

Most people who don’t have bipolar, when trying to describe it, end up using the idea of “mood swings.” That’s understandable. After all, we’re talking about a disorder that can produce the deepest depths of depression and the most dizzying heights of excitement in the same person. And we all have mood swings, which means bipolar would just be like having a lot of them, right?

A better way to think of bipolar is as something more like mood extremes. And I guess that makes this a good place to talk about what bipolar is.

Bipolar is basically a mood disorder

Bipolar episodes mainly produce changes in a person’s mood and energy levels, which in turn affect their behaviour. Of course you know that normally, when you’re happy you tend to be full of energy and confidence, and when you’re low, you get tired quicker and doubt yourself more. It’s kind of similar with bipolar, but the changes are more feelings are more intense.

If you remember from my series on depressive disorder, I tried to explain how depression isn’t an emotion as much as it’s a condition. Depression isn’t something that happens when a person is sad. Instead depression itself can make a person extremely, and often even unexplainably, sad.

In the same way, bipolar is a condition, but it’s different in that episodes can sometimes be “manic,” instead of only depressive. “Manic” means that things generally go up, instead of down (I’ll explain this further in a bit.)

(Some people also have mixed episodes, where a manic episode morphs after a while into a depressive one — or vice versa — without a recovery period in between. And yes, some people actually experience switches from manic moods to depressive and back, within the same episode — but that’s not necessarily the norm.)

So let’s talk about bipolar episodes

If you’re like most people, you probably think of a mental illness as something that’s there until it no longer is — like tuberculosis, for instance. And some are. But others, like bipolar, are recurrent, or episodic, like asthma. So the goal isn’t so much “cure” as prevention (see my post on what’s wrong with a cure-focused mindset when it comes to mental illness). The goal is to prevent episodes, and even if they occur, to minimise problems during an episode, and prevent them persisting after.

During a manic episode, things go up. The person is more active, more energetic, feels more alive. They might feel more creative and confident than usual. They are also less inhibited, which can result in greater spending, increased sexual behaviour, and a willingness to take chances they ordinarily wouldn’t.

If you think all of this sounds nice, you’re not completely wrong. Sometimes, like in what’s known as a “hypomanic” episode, that’s as far as it goes, and the person may actually feel happier and even more productive than usual. (Some people only ever have these kinds of hypomanic episodes, and they don’t interfere with their daily lives as much, although the depressive episodes still do).

In a depressive episode on the other hand, things general head in the opposite direction. Symptoms are pretty much like those of a depressive disorder (which I’ve explained in detail here and here). Mood and energy levels drop and stay down for long periods of time. The person loses interest in stuff they normally enjoy: just to get out of bed can feel like the… Biggest. Chore. Ever.

Sleeping and eating patterns (and weight) are often affected (up or down). Life appears overwhelming, the future seems bleak, and thoughts of death or suicide may be frequent and hard to resist.

Psychotic symptoms can occur in both manic and depressive episodes

“Psychosis” is the expression psychiatrists use to describe conditions where a person loses touch with reality. That is, when a person hears voices of people that aren’t there, or sees things no one else does (both being examples of hallucinations), or confidently hold beliefs others that aren’t true or that others find extremely unusual (delusions).

These psychotic symptoms of hallucinations and delusions can occur in any mental illness. 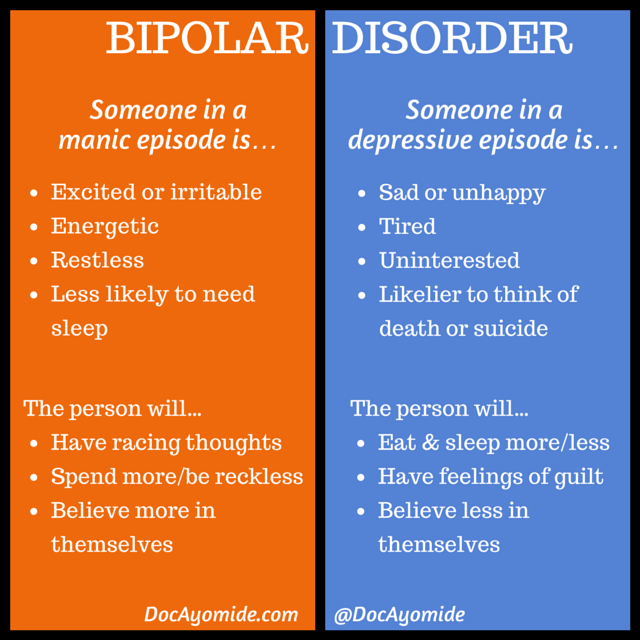 P.S. Those links I promised…

Want to know if you or someone you love may have bipolar? Go here to do an online test to learn more. (Keep in mind: this is no substitute for actually seeing a doctor! It’s just to help guide you in making a decision to see one.)

Get printable PDFs on bipolar and other mental health conditions from the Black Dog Institute website.