This is the second of two posts on inheriting mental illness and was originally published on BellaNaija. In the first part which you can read here, I explained the inheritance of mental illness: how it works, and why the answer to the question is, “Yes and no.” You can enjoy this post without reading that first, but be sure to check it out, because that’s where I break down the theory.

I want to consider this very important question through the lenses of familiar cultural beliefs about inheriting mental illness.

You know the kind I’m talking about…

So let’s break them down. But first let me make a distinction.

Most people I’ve spoken to seem to think of inheritance along the lines of what happens in a condition like sickle cell, so I think it’ll help to use the difference to explain things more clearly.

In sickle cell, transmission is relatively straightforward: if a parent has the sickle cell gene (S or C), they transfer it to their kids. If both parents have it, there’s a chance each of their children could have SS. (Of which it’s still a chance, but it’s a relatively high chance, at about 25% for each child if both parents are AS.)

Also, the chances of inheriting stuff based on what we know so far, are often fractions of 1, or single digits at best, and those chances are affected by lots of other stuff that isn’t genetic, like events surrounding birth and personal experiences.

In other words, if you think of them as stories, the story of the genetics of sickle cell is like a single episode of Friends: if that’s all you see, it’s enough, you don’t have to see everything to get it. For most mental disorders, however, the story is rather more like following a series lasting years, that is still ongoing: there are many parts to the story, and many sub-plots, and we don’t even know yet how it all ends.

So keeping that in mind…

Let’s talk about our traditional ideas…

If a person has a mental illness, that means their child will have it

That someone has a mental disorder doesn’t mean their child will have it, any more than a parent having hypertension or breast cancer guarantees that their children will have it. It does mean they are more likely, but this is relative. That is, if there’s a 1% chance of just anyone having that condition, and a parent having it raises that by fourfold, that’s still comes to a 4% risk. Which is, you know, still pretty small. And the risk of the more serious mental health problems is often smaller than 1%.

You can’t make such predictions.

We don’t have mental illness in my family

Um. Sorry to bust your bubble, but you don’t really know, do you? I mean, let’s face it, how well do most of us know our own families? Heck, if you’re like most Nigerians, you’ve probably been introduced to some distant cousin or previously unknown uncle as recently as within the last couple years. (Especially when one takes into consideration the larger polygamous families we often hail from.)

Of course, part of the issue is our belief that mental health disorders are obvious and we’d know if anyone had one. But that’s simply not the case. Also keep in mind that mental health problems are not exactly a great topic for discussion over lunch. Like I often point out to people, if you had a mental disorder, how much of your family would you want it known to, if you could help it? What makes you think they’d tell you?

As I explained in my previous post, although it’s true that mental illnesses can be inherited our ideas of how are often very wrong. In a sense, you could say people don’t mostly get mental illnesses from their parents: they get it from their families. And they don’t mostly get it from one single gene, but from a complex interaction involving a little of everything from multiple genes to early childhood events and life stresses and even protective factors. In other words, the whole question of mental illness inheritance is so complex, making predictions is often useless.

Don’t forget that a) most of us don’t even know our families, and b) you’d be amazed how many families have a history of one mental illness or the other. Making predictions based on something so complex really is just not very useful. 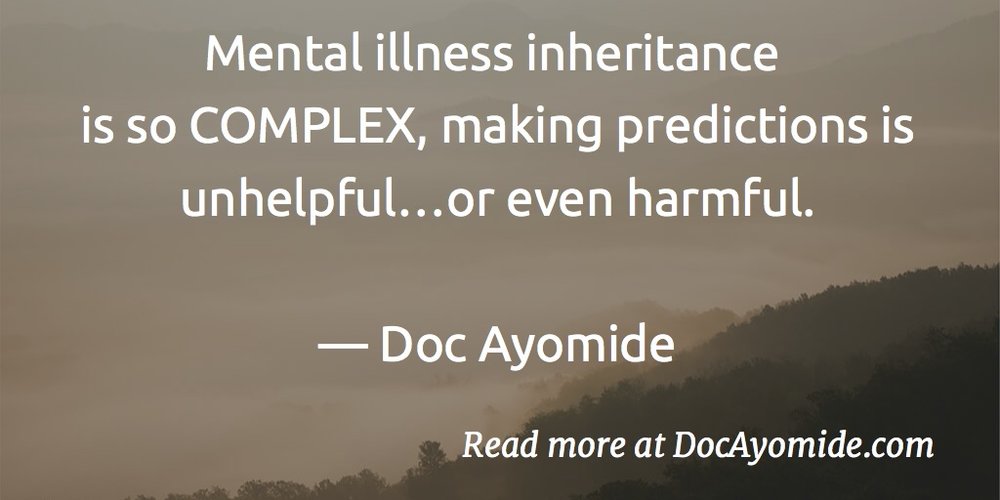 There’s no good reason for this. The traditional basis is that breastfeeding may transmit the illness to the child (unless there’s some other reason I’m missing?), but that’s just not real. Like I explained in my previous post, genes are the transmitters of inheritable traits, and genes don’t exactly go through breast milk, sorry.

It’s really that simple, though.

The truth is, given what we know about the benefits of breastfeeding, nursing mothers should be breastfeeding as soon as they possibly can. Those early days are key and breastfeeding is a key part of establishing the bond between mother and child. We should be looking for more ways to make that possible, especially for those who find it difficult, not the other way around. That’s why even in nursing mothers who have to be admitted for treatment of mental illness, you want to see them get well real quick so they can go back to their babies.

The mental illness was caused by a [insert stressful event]

That word, “cause,” is a hard word for us doctors to use. And it’s even harder to use in mental health, where defining a cause is no small matter. To say A caused B is to imply that B would not have happened if not for A. And that’s not something you can often prove in real life.

I explained this more fully in the first post, but I’ll just add here that we also happen to know that although mental disorders are largely genetic, a lot more things are involved: events surrounding labour, early childhood experiences, life challenges and adverse events, the nature of families and upbringing, individual personality and biochemistry.

How does one muster the confidence to say what caused what in such a milieu?

(Except of course one oversimplifies it to one or two causes that are one’s personal favourites, but how is that helpful?)

This is obviously not an exhaustive list, so feel free to mention in the comments any others you’d like to learn more about. But I hope it’s a long enough list that you can appreciate my two main points, which I’ve repeated throughout but will summarise here.

I hope this has helped you. And if it has I hope you share it: too many people need to understand this issue better. And don’t forget to mention in the comments about any beliefs you would like to understand better that I didn’t mention.