What plane crashes can teach us about violence in mental illness

Yes o — I’m still on this mental illness and violence matter!
Honestly, I thought I’d just do a post on it, but each post so far has produced responses that necessitate another. (This will be the last for now, although I’m sure I’ll have to come back to it.)

What do you say to people who refer to the cases in the U.S. where someone with a known history of mental illness picks up a gun and shoots people at random at a mall or school?

It’s a valid question, to be sure, but what if the question itself is wrong? What if the very fact that we connect mental illness and mass shootings is already a misconception? I find most people give me blank stares when I say that, so I need to explain.

I’ve explained this in a earlier post, but here are a few more stats. 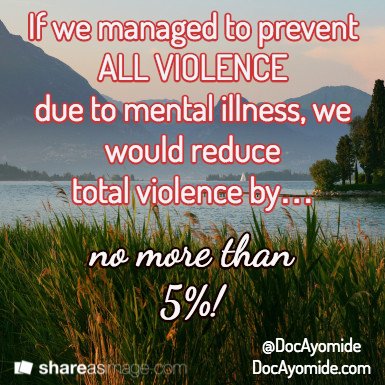 But you might wonder, if there’s really so little violence from people with mental illness, why does it feel like such a lot? Am I saying the feeling is without basis?

No, I’m not. It’s hard to ignore your feelings, anyway, especially when they’re really strong. But in this case, the feelings have a basis, just not necessarily in fact.

Here’s a video, for instance, illustrating how the feelings we have about violence and mental illness are way off the mark from reality.

To better understand the issue here, let’s look at aeroplanes.

Let’s think about aeroplanes for a bit: are they really dangerous?

If you’re like me, you probably know many people who’re nervous about flying — understandable, given recent events like the Malaysian Airlines incidents and closer home, the Dana crash. In fact I know someone who insisted, after the Dana one, on going as far as Abuja by road.

But aeroplanes remain by far the safest means of travel. For instance, consider that:

Long story short, planes are about the safest form of transport (not counting walking)!

If you’ve ever tried to argue with someone who’s nervous about flying, though, you’d know none of those stats is convincing. So maybe instead of more stats, let’s try to understand why the fear.

As with plane crashes, so also (in a sense) with mental illness

These three factors also apply in mental illness. Not exactly, of course, since you really can’t compare machine accidents with human illnesses. But I think the comparison illustrates the points I’m trying to make.

So what about when there is actually violence?

Violence does happen in mental illness after all. I’m not trying to pretend that it doesn’t. The reason I’ve emphasised the reduced likelihood is because most people already believe the rates are high. But it’s not like it doesn’t happen.

The good thing is, it doesn’t happen anyhow. Violence in mental illness has certain characteristics. (Generally speaking, that is. There will be exceptions, but that’s just the point: they are exceptions.)

Now, if that isn’t the most tragic part of the entire business, I don’t know what is.

I’ll leave you with this video. (Warning: mild language — of the sarcastic variety, that is!) 🙂