May 10 was Mother’s day, and May 11-17 is Mental Health Awareness Week 2015. So in honour of both, I’ll be talking today about a major mental health issue that affects mothers: “baby blues” and post-pregnancy depression.

“Hey honey, did you sleep?”

Iyabo stared back at her husband.

“Oh, darling.” He came over and held her hand,  his face wrinkled with concern. “What’s wrong? What’s happening to you?”

A tear slid down her face, but she remained quiet.  She hated that she was making him feel bad, but she was sure he would feel far worse if she let him in on what she was really thinking.

She wasn’t sure when It had started, but she knew something was wrong by the time her little girl — their firstborn — turned two months. The sleep had been the first thing to go. At first she thought it was the baby, but then it didn’t get better even on days when things were relatively stressless.

Then there was the unhappiness. And it wasn’t the kind of sadness she sometimes felt, nothing like when she had lost her mother. This was different. For one she couldn’t even say why she was unhappy. She sometimes thought it was the baby, but that didn’t make sense: they had been waiting for a child for 3 years. She wanted the baby with all her heart.

But now the baby was here and she couldn’t seem to make herself care. She still cared for the baby, but she was mostly forcing herself.

Until she couldn’t anymore, and that was when her husband knew the issue was more than just sleep. But he didn’t know the half of it. He only knew she couldn’t seem to get up from bed even though she wasn’t sleeping, and that she had stopped doing anything at all around the house, including caring for the baby.

He didn’t know that, once or twice — and this terrified her — she had even had thoughts of harming the poor little girl. He didn’t know that everything seemed to have lost value for her — he, the baby, even her own self.

“I’m a terrible mother,” she thought. “I don’t deserve to have a child.”

How could she tell anyone that?

“Iyabo” is entirely fictional, of course, but her story is that of millions of mothers worldwide.

Post-pregnancy depression (also known as postpartum or postnatal depression) is a common mental health problem in new mothers, even if they’ve had children.

And if you wondering just how common, we’re talking 1 in 10 women after the birth of a child (and yes — about the same number of men).

There’s something else called baby blues, which is far more common: between 30-75% of new mothers, and by some estimates, up to 85%. That’s a lot of women. 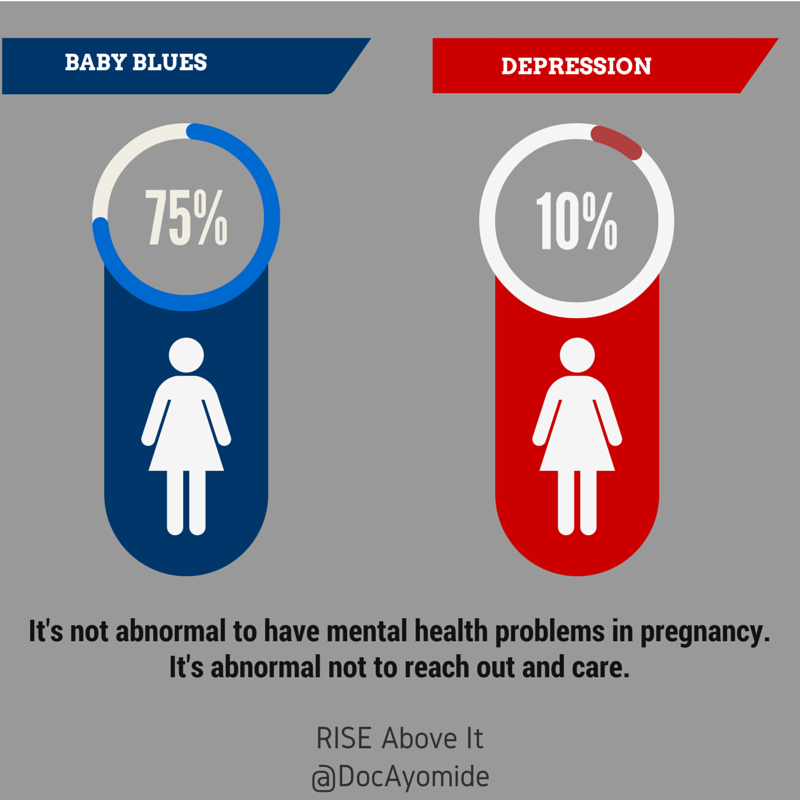 Baby blues are much milder, though. The woman might experience sleep problems, tearfulness, mood swings, and some feelings of inadequacy. But these typically start within a few days after the childbirth, and don’t last beyond a couple weeks, maybe a month after, max. And the woman’s ability to care for her newborn usually is fine.

Depression, though, can start much later (up to 6 months later) and last for months. And unlike blues,  And, perhaps even more serious, it messes majorly with her ability to care for the child when he or she needs her most.

And this is what makes it most important to identify and treat post-pregnancy depression early. Because it’s a double wahala situation: both mother and child are at risk.

One more thing. A few new mothers (1 in 1000) have a more severe condition called post-pregnancy psychosis: hearing voices of unseen people, seeing things others don’t see, being unreasonably convinced that others are out to harm them or their baby, or other unusual and inexplicable beliefs.

You might be wondering: “Um, Doc, isn’t this really just a spiritual attack?” And yes, I get why you might think that. Consider though, that medical treatment is very effective — I’ve personally yet to see where the person didn’t respond. And that in many cases, people go the spiritual route first before coming to the doctor, not the other way round.

What can you do to help?

First of all, you need to know it can happen. (Which is the point of writing this.) One thing I tell people is, don’t wait for the person to tell you: this is not something easy to talk about, so you just might wait in vain.

If you’re close enough, you can just ask yourself. And if you’ve experienced it before, it would be helpful for the person to know they aren’t alone.

It helps too, of course, to have an idea who’s more likely to have post-pregnancy depression, so here are a few things to keep in mind:

Of course, as with most mental health conditions, no single one of these is a cause by itself. They only suggest who is more likely to have it: someone who has none of these issues might get depressed, while another person with all of them might not.

Please don’t hesitate to recommend a visit to a psychiatrist. You’ll be surprised how many people don’t realise that these conditions are medically treatable. It also helps a lot if you’re willing to accompany the mother or couple (with their permission, of course).

Follow up is extremely important. Depression in pregnancy is still really just depression, which means the mother is has a greater likelihood of having depression later. And she doesn’t have to be pregnant. That said, in further pregnancies (which she shouldn’t be afraid of), she should see a psychiatrist even if she has no symptoms, just to be on the safe side.

Most important of all, be there for the person all the way. Don’t judge, don’t presume, don’t blame. Whatever you do, don’t make things worse.

Mothers are wonderful. Let’s be sure to make life easier for them.

Till I write again, keep rising.

If you’re interested in learning more about post-pregnancy depression, you can learn more at the UK NHS.