October 10 every year is World Mental Health Day, and the theme for this year is Living With Schizophrenia. In commemoration of the theme, I will be talking about schizophrenia in this post, and in the follow-up posts.
Olujimi wasn’t sure when it started, but he knew for sure by the middle of March that something was wrong.

He had been having difficulty focusing for some time, but he had put it down to the stress of his bank job. It was his second year on the job, and he thought he was doing pretty well, but he knew hadn’t been getting a lot of rest. So when he found himself forgetting things, and frequently losing his train of thought, he had started to think about taking his annual leave a little earlier.

When he woke up one morning with a distinct sense of being watched by unseen eyes, he knew something was definitely amiss.

He didn’t even know why anyone should be following him. But he felt it all the same. He soon found himself watching people around him with suspicion, distrusting his colleagues and friends and even his fiancee. He kept it all to himself, but an idea began to grow in his mind that there was a conspiracy by some terrorist organisation to destroy him, and everyone around him was in on it. (He wasn’t sure about his fiancee, but it wasn’t impossible that she was being used, was it?)

Then he had started hearing the voices. Or rather, the voice, since it was only one at first – a male voice. Then two others, one of them female, all of them threatening. “We’ll get you,” they would taunt. “Thief! Thief! You think you can hide!” (He hadn’t stolen anything, besides the time he had gone shoplifting with friends in secondary school, and they’d been caught. He’d slept in the police station that night and sworn never to try it again. Now the voices threatened to expose him, and that terrified him, although he couldn’t explain why.)

Sometimes they whispered, sometimes they shouted. But they became more frequent, and he would often find himself responding to them. Once, alone in his apartment, he had shouted, “I’m NOT a thief!” and then felt stupid and started to cry. He felt confused.

He started to pull away from people, and became more religious. Maybe it was a spiritual attack, he thought. He started fasting too, sometimes for days, although his family started complaining that he was losing weight.

Nothing changed. Or rather, things got worse. The leave didn’t help either. He had spent all of it at home, not eating for days. Just getting up out of bed was a chore, and he sometimes lay there all day.

His fiancee was worried out of her mind. She had noticed his aloofness and initially thought it was work. But then it had gone on for over a month, and even his worst moods weren’t like that. She thought he wanted out – he knew that because she kept asking him. He didn’t, to be honest, but he didn’t want to be with her most of the time these days. It felt like too much of a burden, and he didn’t know how to explain it to her.

That really was the problem. He didn’t know how to explain it all. He was the most confused he had ever been, and he had no words for it…

Maybe I should first say what it is not. Schizophrenia is NOT split personality or multiple personality disorder, never mind that it is often referred to like it is. For instance, you’ll often hear people say someone is schizophrenic, and what they mean is that the person is acting as if they are two different people. That’s not what schizophrenia is. Neither is schizophrenia equal to “acting crazy.” That only implies that someone is acting in a way different from how you might expect a person to act, which could be for any number of reasons that don’t even have to do with mental disorder. (Like I probably wouldn’t act normally if I was running for dear life from out of a building on fire!) 🙂 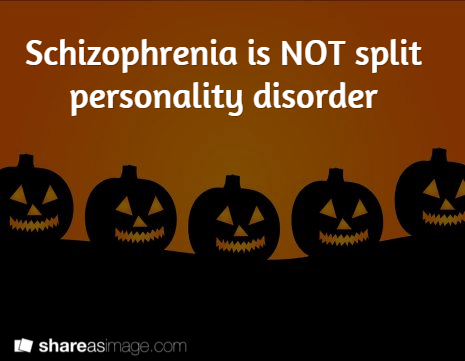 There’s a reason for this common misconception, though. “Schizophrenia” comes from two Greek words meaning “split [or divided] mind,” and knowledge of that meaning probably gave rise to the idea that it was a disorder of split personality. (I know that’s what I myself used to think, when I first heard about it as a teenager listening to Eminem. A good case of half-knowledge sometimes being more harmful!).  But the idea of “split mind” suggested by the word, “schizophrenia” is really meant to refer to the nature of the illness: mental functions are split.

In fact, better yet, as law professor and Yale alumnus Elyn Saks (who has had schizophrenia herself) put it in a very good TED Talk, “the schizophrenic mind is not split, but shattered.”

Here’s how the World Health Organisation defines it:

Schizophrenia is a severe mental disorder, characterized by profound disruptions in thinking, affecting language, perception, and the sense of self. It often includes psychotic experiences, such as hearing voices or delusions.

So like in the fictional story of Olujimi, simply thinking becomes difficult. The person’s own thoughts begin to be projected as external voices (we all talk about “the voices in our head”: in schizophrenia, those voices get real). Ideas pop into the mind almost unbidden and even independent of regular logic.

This is what is known as a psychotic disorder, of which schizophrenia is just one type (although the most important type). These are disorders in which reality is distorted for a person who has them, and such people often find themselves experiencing reality differently from most people. Some describe living in two realities at the same time, and having to relate with people who don’t get it at all.

If that sounds tough, it’s because it really is. In many ways, schizophrenia is like the granddaddy of mental disorders. Not because it’s the most common (it’s not, although it is pretty common), but because it’s one of the most disabling. As you have probably realised by now, schizophrenia, if left untreated, can easily turn a high functioning person to a street wanderer.

Speaking of street wanderers, the kind of people most often thought of as “mad people” (yes, I know you have probably wondered), the reality is there’s a good chance many of them have schizophrenia, or some other psychotic disorder. Not necessarily all, of course, but schizophrenia, left untreated, is one mental illness that can land a person on the streets. Luckily, this often doesn’t have to be the case, but that makes it even more painful that things turn out that way for some people. Even then (and I personally know this to be true), there is still hope for such people if they can get the medical care they need.

That said, many people who have schizophrenia, especially in the early stages, don’t look anything like street people. Like in the story I told above, some continue to live and work and carry on, without talking to themselves a whole lot (at least not more than anyone else!) or being aggressive or violent (which most people with schizophrenia aren’t anyway). And the idea that schizophrenia means a person walking around half-clothed, muttering to themselves and acting aggressively? The problem with that is it makes it sadly too easy to miss the person right next to you who might be struggling with it.

For now, here are some fast facts on schizophrenia (via World Health Organisation):

In my coming posts, I’ll be sharing even more good stuff with you, including how you can recognise schizophrenia, and what you can do to help someone who’s been diagnosed with it. Keep your eyes peeled!

Before you go: a short video

For now, check out this super cool video made by Time to Change (a UK non-profit for mental health). (Hint: it’s not as scary as it looks. You’ll love it, I promise!) When you’ve finished watching it, please share both the video and this post. Let’s get this info out, because knowledge is still power. Enjoy!

P.S. The story of “Olujimi,” while crafted by me to reflect the reality of schizophrenia, is entirely fictional, and any resemblance to any person, living or otherwise, is purely coincidental.