I recently disagreed with a friend over mental illness and terrorism. It happened after the terrible Charlie Hebdo incident, and started because he had the temerity to suggest that the murderous terrorists were deserving of a psychiatric evaluation.
That is one sure way to get me upset.

Whenever there’s a discussion (online or off) of some extreme violence or terrorist act (like the Boko Haram ones we’ve been experiencing here in Nigeria), it’s never long before someone says something along the lines of the perpetrators being crazy or mad or some other reference to a mental health problem. (It was even recently suggested—by the Nigerian Medical Association, no less!—that Nigerian politicians be checked for mental illness, the implicit suggestion being that corruption must be rooted in some form of mental illness. Imagine that.)

I realise that people who say things like that often don’t mean harm, but do so based on the level of understanding they have of mental disorders. Unfortunately, their not knowing does not reduce the danger of these kinds of misconceptions to people with real mental disorders. So in this post, I want to explain what is wrong with thinking like that, and why we should stop, and what we should do instead.

The connection between visas and terrorists

But first, let’s talk about visas.

Many of us know how anxious it can be to apply for a visa to say, America or England. (In fact, you only need consider the number of church testimonies that are visa-related to have an idea of how big a deal it is to get one.) And if you’re like many people, you have probably, at least once, experienced the ordeal of sitting there in front of the officer and knowing that, due to no personal fault of your own, you were being viewed with suspicion.

Take a moment now and just imagine that all over again. Even if you have never experienced it (maybe you’re among the lucky few who get visas on demand—although even they experience it), try to imagine what it must feel like.

Imagine the sense of indignity, of knowing that respectable as you know yourself to be, you are being considered a common crook by this person who doesn’t even know you and thinks they do. Imagine the shame of knowing you can do little to change this situation, that your attempts to change this mistaken perception of you might be easily misinterpreted for the overzealousness of the guilty.

Imagine how it feels to know you are being subjected to this indignity because of actions of people you don’t at all identify with at all, although they are supposed to be Nigerians like you. You are not only far from an advanced fee fraudster (aka 419 people) or drug peddler, you probably don’t even know anyone like that j your wide social network. In fact you don’t even know anyone who knows anyone who is any of these things. (Okay, maybe that’s a stretch. Or is it?)

And yet, this person you don’t even know is giving you side eye, and getting ready to take decisions that may majorly affect your life like they know the first thing about you. And for all you yourself know, you’re probably a better person than they are.

I hope by now you’re feeling something of the unfairness of it all. If you’ve been there yourself, sitting in that chair before that random visa officer, and maybe even had your visa application rejected, I hope you remember what it felt like, and maybe you’re even feeling the unfairness of it all over again. And if you haven’t, I hope you are trying to wrap your mind around how messed up all of that is.

I hope all that because I hope too, that the next time you hear terrorists and people with mental disorders spoken of in the same breath, that you remember that it’s no different from putting people we don’t know in a chair and passing judgement on them like we know them.

(Actually, it’s not the same thing: it’s worse, because at least the visa officer is really just doing their job, and at least they have guidelines to work with to make the whole affair at least a little less subjective.)

And I hope when you hear that, that you decide with me that it’s time we all just stopped.

Why do I say this? For one singular reason:

People with mental illnesses are no more violent than those anyone else.


There is a ton of evidence to back this up, too. (Go here to see a nice summary of this evidence, written in non-medical jargon.)

It’s really that simple. And it means that we have no basis whatever to speak of people with mental illness as violent. Am I saying we shouldn’t even bother evaluating the mental state of those being prosecuted or convicted for crime? No, we should no more ignore people’s mental state than we should their physical state.

But it does mean we should no more expect a terrorist or any other similar person to have mental disorder any more than we would expect them to have cancer. They may and they may not. Osama bin Laden could well have had liver cancer or something, and it wouldn’t have been a reason to start evaluating terrorists for liver cancer.

Am I saying people with mental illness don’t get violent?

No. They do. Anyone can be violent. And that really is the point: that people with mental illness do not have a monopoly on violence. 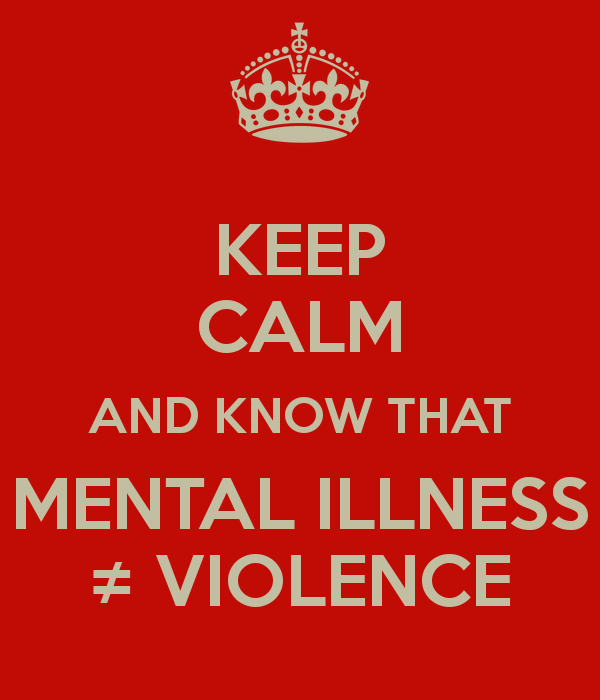 Taken together with the MacArthur study, these papers have painted a more complex picture about mental illness and violence. They suggest that violence by people with mental illness — like aggression in the general population — stems from multiple overlapping factors interacting in complex ways. These include family history, personal stressors (such as divorce or bereavement), and socioeconomic factors (such as poverty and homelessness). Substance abuse is often tightly woven into this fabric, making it hard to tease apart the influence of other less obvious factors. (See the full article here.)

Did you catch that? Look at the words I put in bold. Violence in mental illness stems from pretty much the same factors as violence in everyone else. Violence is something human beings do, and they don’t need to be mentally ill to do it.

So for us to label millions of innocent people for the terrible actions of an unrepresentative few is the worst kind of injustice. And all the more when the ones we label are the ones we really should be going all out to embrace, because they already have enough labels.

The media doesn’t help though, but that is a topic for another day. (I’ve previously written, though, about how programmes like M-Net’s widely popular Tinsel don’t help — you can read that here.)

In the meantime, here’s another fact you might want to think about:

People with mental illness are more likely to be victims of violence than its perpetrators.


But again, let’s leave that for another day, because it deserves a whole post on its own.

Okay, so what can you do with this info?

First of all, it’s hard to shake the idea off. Trust me, I know. If you’ve been told all your life that people with mental illness are violent, and you have believed it, it would be unrealistic to expect that one single post would change your mind. If you have had a couple experiences with that violence, it would be even harder.

So I will only ask one question: Whatever violence you have personally experienced in your lifetime, was it actually from people with mental disorder? If, as I suspect, the answer is “No,” then the question you must ask yourself is why you still hold on to that belief.

And if you agree that it is not and want to do something about it, a good place to start is in your next conversation. The next time you hear someone speak about terrorism (or any other form of violence) in the same breath as mental illness, don’t let it pass. Speak up. Challenge it. Stand up for what is right. And if you think it will help, refer them to this article.

And know that every person you are able to get to question this wrong perception of innocent people is one more person who will help people with mental disorders rise above the stigma.