This is my second post in a short series on suicide. You’ll find a link to the first one at the end of this post.
There are 2 groups of people here. – Those who are personally struggling with suicide, whether they’ve made an attempt, or not. – Those whose friends or relatives actually completed suicide. This second group are also referred to as “suicide survivors.”

How do you help either of these? First, you need to recognise that these groups have very different needs. So I’ll take them separately, beginning with the group of people who are directly affected.

You first need to know who’s at risk

Before we can talk about how to help those at risk of suicide, you need, first of all, to even know who is at risk. Keep in mind that suicidal thoughts are very difficult to talk about (is there an easy way to tell people you’re considering ending your life?).

So even though I know it’s not something we’re culturally used to, the reality is we may need to be the first one to bring the subject up with someone who might be at risk. But how do we know who that might be?

Luckily for us, there are some well-recognised risk factors. Keep in mind, these are NOT predictive: their presence doesn’t mean suicide will happen, nor does their absence rule it out. Their presence in a particular person only suggests that it might be more likely in that person.

So here are a few, in no particular order:

If you want an easy to remember list of warning signs, this mnemonic will help:

Have you noticed any…

How you can help people struggling with thoughts of suicide

So you’ve come to realise that someone you know is at risk of suicide and you’ve brought it up, and it turns out they truly are. What do you do next?

Here are some helpful tips:

That doesn’t help. The person is already thinking the thought, so it’s rather too late for that anyway. (For those who believe in the Bible, God didn’t tell Elijah, “I forbid!” when the old prophet was expressing his own morbid thoughts.) But it’s not just that phrase. Don’t talk, generally, until you’ve actually let the person speak their mind. Saying “God forbid!” and other favourite Nigerian expressions only tells the person, “Stop talking about this, I don’t want to hear this kind of stuff.”

The truth is, you might not need to say something as much as you need to listen. Many people who struggle with suicidal thoughts have no one they feel comfortable opening up to about what’s going on in their mind.

You can be that person. 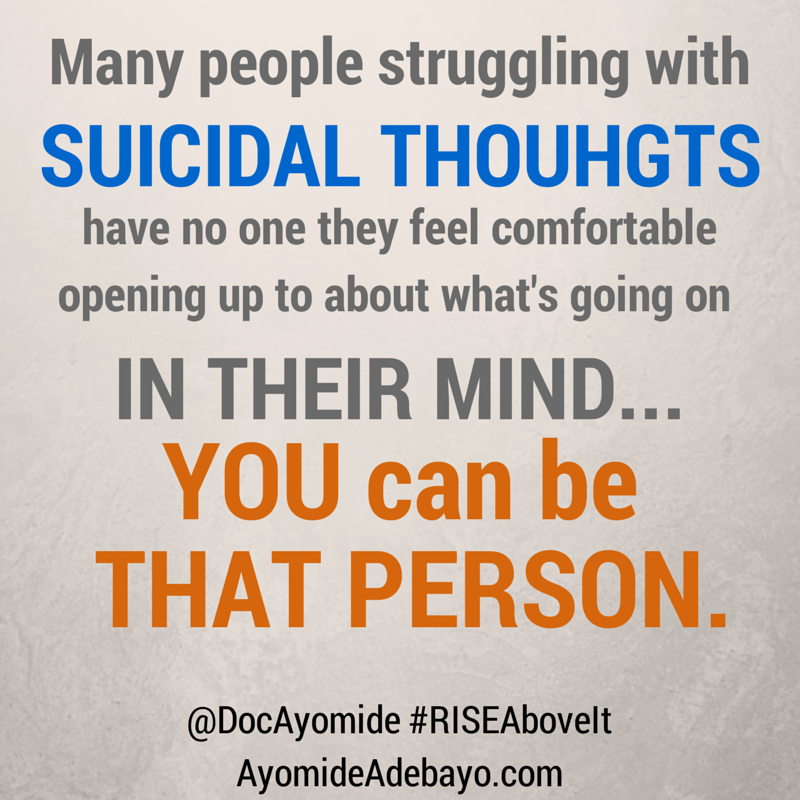 Whatever you do, don’t ask, “Is that why you want to kill yourself?” The fact is, there’s no reason for suicide that can’t be argued against, but arguing is not the issue. What matters is, right now, the person thinks it does. And that in itself should tell you that they aren’t feeling able to handle what life is throwing their way.

Instead of making them feel they’re crazy for thinking about suicide, let them know you don’t think less of them for letting you know. Let them know it’s normal for people to feel that way now and then (even if you personally never have; that’s not the point). And most of all, let them know you really are there for them.

Many people would hesitate at this point, both those having thoughts of suicide and those who may want to help them. There’s this idea we have that only “very serious cases” need to see a mental health professional.

The reality is, the best time to offer help is exactly when it’s not yet that “serious.”

Another thing I have come to find is many people who struggle with suicidal thoughts may not even be as averse to professional help as the people who love them, and even when they are, they can often be persuaded by someone they trust. Talk to your religious leader, by all means, but check out a mental health professional too.

How you can help suicide survivors

Don’t blame. Just be there.

Don’t try to find some cause. One of the biggest questions people who have lost people to suicide is, “Why did they do it?” Even when the attempt isn’t completed, there isn’t really any satisfactory answer to this question. It’s one of those questions for which no answer is ever really enough.

Instead of trying to blame it on something (and I know the urge to do this is very strong indeed in most of us), try rather to refocus them on what to do next. How can they better support the person? How can they help them next time they’re feeling suicidal?

What about if the person really did die, if the attempt really was completed? The challenge with this is, in addition to the grief anyone would normally feel, there’s also the questions they leave behind. There’s often guilt, too: those left behind often feel like it’s somehow their fault that their loved one died, or that they didn’t do enough, especially when it takes them by surprise. The challenge here is to help them focus on moving forward with their own lives, and although that’s easier said than done, the first step can be to simply be there.

Outside help isn’t just for people who attempt suicide, it’s also for those who are left behind after an attempted or a completed suicide. The experience can often leave those family and close friends shattered, unsure whether the person might not do it again. Unsure even of life itself, because the attempt of a loved on to take their own life can leave you wondering what you can possibly be sure of any more.

So be quick to recommend help. This can be through their pastor, imam (alfa, as we like to say here), or whoever else they respect in their circle of influence who will listen without judgement. But you should also strongly consider seeing a mental health professional.

So that’s about it for now. This isn’t exhaustive, but I’ve tried to cover the basics. If there’s stuff I left out? Let me know in the comments!

Like I said, this is my second post on suicide. You can find the first one here: “Ever wondered why people ‘commit’ suicide?”