Do you too believe these 8 misconceptions about suicide?

Three words that capture three key concepts in suicide prevention. And when you think about it, what they all have in common is that they’re things we can do for those who are struggling with suicidal thoughts.

The question you have to wonder about, therefore, is why don’t they occur more often? If we can prevent suicide, why aren’t we? There are a number of reasons, but a lot of it comes down to the beliefs and ideas we have about suicide, and the ways we think about it.

#2. We know suicide happens, but we “know” it doesn’t happen among Nigerians (or blacks, or people of our faith, or whatever group we belong to that we consider “different”).
I still had to explain this to 2 fellow doctors as recently as yesterday. I kid you not. Doctors o. They were confidently arguing that suicide is not so common here, and it’s only increasing among us because of “all this Western media.” But which of our cultures does not have taboos about suicide? The taboos themselves offer a clue: they indicate not only that suicide was a thing all the way back then, but also that it was not to be spoken of. But the fact that we don’t speak of it doesn’t mean it wasn’t happening, and we can’t say confidently that it was less frequent among us than anywhere else.

#3. We’re afraid talking about it might give ideas to someone who wasn’t thinking about it before.
I get this. Honest, I do. But it simply isn’t true. I think it comes from the idea that suicidal thoughts aren’t common, anyway. The reality, however, is that far more people think about it than ever open their mouths to say it. You asking is an invitation for them to talk about it. And here’s what’s even more cool: talking about suicide actually helps reduce the likelihood of carrying it out. Come on, why would we want to pass up a chance to help reduce this thing?

#4. We are afraid of thinking about death in general.
Again I get it. Death is…well, morbid. There’s a reason why many people die without a will, even though it’s the sensible thing to do: the idea of our mortality is scary. (In fact, I’m convinced that a lot of our “God forbid” type responses to talk of death arise from pure terror.) But face it we must. And especially when our facing it can help someone else turn away from accelerating it.

#5. We think the person is “seeking attention.”
This one is the worst. Someone is feeling like they’re running out of reasons to stay alive, and people think they’re just “seeking attention.” People who talk about suicide really often don’t want to do it, or at least wouldn’t have wanted to normally. It’s the feeling of being overwhelmed that pushes people to this place. And even if they were indeed seeking attention, doesn’t that worry us? The kind of attention someone must need to seek it that way — doesn’t that suggest serious underlying problems?

#6. We think if we have “talked them out of it” once, the worst is officially over.
If you ever had the privilege, it can feel really good to talk someone out of taking their lives. And it can feel so good, we might forget to keep following up with them. It’s great to help stop someone from considering it today. But that doesn’t mean they might not need us again next week.

#7. We don’t recognise the signs (but we think we do).
There’s a lot of people you’ll meet, even today, who are covering up suicidal thoughts with bright smiles. If we don’t look beyond the surface, you might buy the misconception that they’re happy. We often think it must have been obvious that someone was considering suicide, so we ask, “How could their family/friends/partner have missed it?” as if we wouldn’t have. But the truth is, the signs are often under the surface. Also, it’s not exactly easy to talk about, remember? Plus, we often don’t make the talking easier.

#8. We feel like we won’t know what to say.
Again I totally get this. But here’s the thing: that’s okay. Even better, you don’t have to. Really, you don’t. Half of making the connection is simply listening. I know there’s all these movie scenes where someone wants to jump off a bridge and some guy just knows the right things to say to stop them. But real life isn’t so sexy. And that’s okay, because it’s often not so much about what you say, either, as much as giving the person a chance to be heard. And just listening is something all of us can do, right? And anyway, if we don’t listen, how do we know exactly what to address when we do speak?

So what do we do?

I’ve written an article on this: Still on suicide: what you can do if it’s you, and how you can help if it’s not. (Go on and check it out.) But in light of this year’s theme, I want to add a few more things to what’s in that post.

Suicide is very closely linked with disconnection: a feeling of disconnection from other people, from significant communities in a person’s life, and from a sense of personal meaning and life purpose. When we connect with people experiencing suicidal thinking, we give them a chance to express how they feel and find a way out.

Especially when someone has made an attempt to take their life, those who care about them can be left feeling very confused. It’s easy at that point to want to scold, in the thinking that you can make that person “see sense.” But it doesn’t work like that. The one thing very few do, and which would actually help much more, is listen to the person and try to understand why they did what they did. That’s what connection is.

And not only connection with those who might be considering suicide, but very importantly, with the ones left behind after someone actually has. 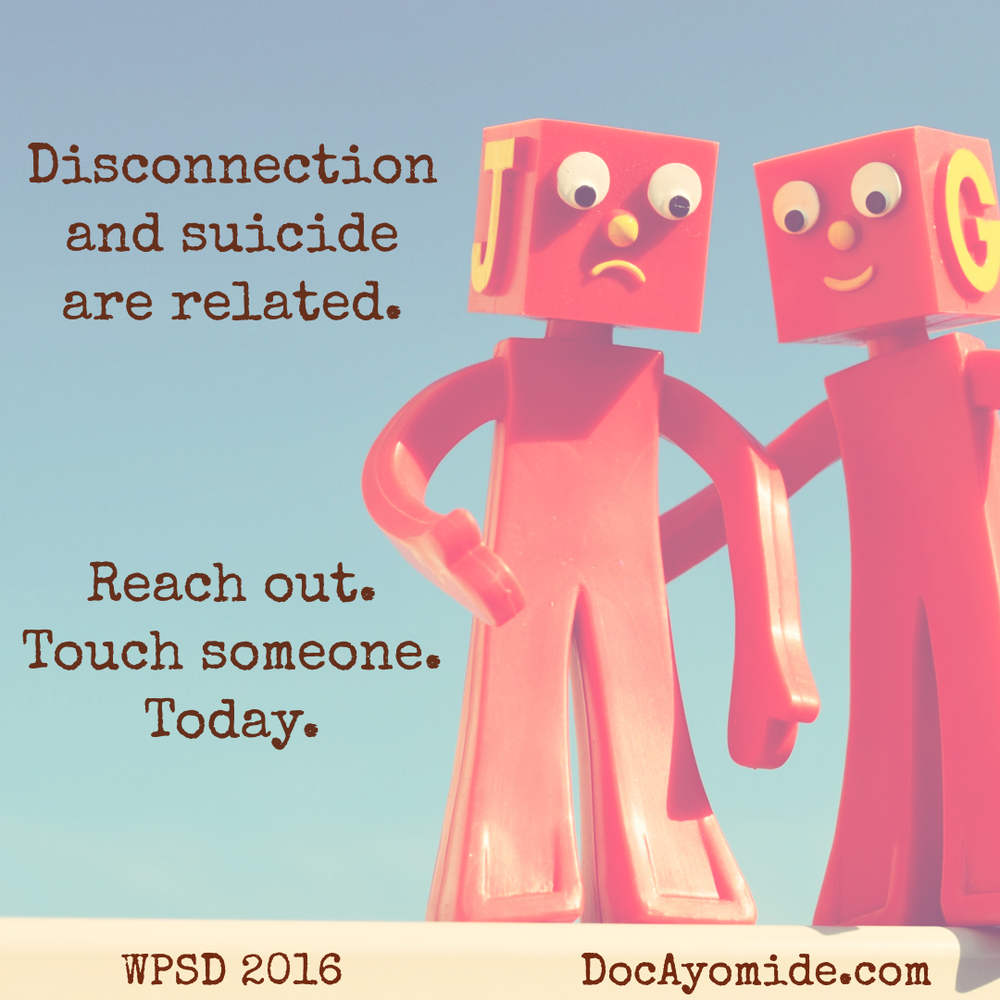 Suicide is the elephant in the room of society. Think about it: more people die from suicide worldwide than from war and homicides (murders) combined. We don’t talk about suicide. And that’s not helping. It won’t go away because we are quiet about it.

The only way to correct the myths and educate people about suicide is to actually talk about it. Conversations about death — and about suicide in particular — are difficult, but they are necessary. And like I said earlier, the work is more about listening than about going on and on with “advice.”

Another key aspect of communication is the media. Media has an influence on suicide rates, and reporting about suicide has been shown to actually cause spikes in the rates, especially when this reporting is explicit. On the other hand, reporting it in ways that show suicidal thinking can be overcome has been shown to help. If you’re a journalist, here’s a helpful link containing guidance from WHO (PDF). Feel free to email me if you have specific questions.

Of course this is where it all comes down to. To caring. Connection is the effort to reach out, communication is the way we say what we say, but caring is where things get practical. And it’s at every level.

At the national level, we need more humane laws around suicide (not the current ones that make it a crime for a person to try to take their life — I’ve written about this in the past).

At the healthcare level, we need to be more educated. It’s been found that a large number of people who have taken their lives or attempted to have previously seen a doctor or other healthcare professional, but how many were asked about the possibility? I know many of my colleagues are stressed and overworked, but if we educate ourselves a little more about this, and maybe recognise it a little more often, we can make more of a difference.

At the personal level, you can make a difference too. There are people around you going through a hard time (this recession that’s “just a word” definitely isn’t helping): take a few moments and make a phone call, or pay a visit, or invite them over for lunch or dinner. Just do something. You can’t save everyone, but not even superheroes do, right? But you can save someone, or maybe even more.

Go on. Think of someone right now.

And write in the comments and say what you did — or decided to do. (But don’t give names or anything personally identifying!)

P.S. If you’re struggling with overwhelm in any way, sign up below this post to get my guide on dealing with it. You can also book a session with me so we can talk about it in more detail!