If you think suicide isn’t that common, you’re dead wrong. Here’s why.

Every time the subject of suicide comes up in a conversation (usually because there’s one in the media or at times like the recent World Suicide Prevention Day, someone is sure to ask me why we should worry about suicide, and if it’s really such a big deal. (And yes, this has been known to happen even when the conversation is with medical doctors.)
The short answer: it is. It’s a very big deal. The long answer is the rest of this post, and part of why I’m writing it is to direct people here and save my saliva. I’ve written about it a number of times in the past (and I’m sure I will a bit more), but I’ve never broken it down the way I’m about to.

(I feel like a rapper about to tell a story. Speaking of which, does anyone know any solid rap song about suicide? Let me know!)

So I’ll break this into two parts: some stats about suicide, and how it plays out (and what we can do about it).

Here’s a few statistics about suicide…

As many as 1 in 5 people have experienced morbid thoughts — thinking seriously about death.

As many as 1 in 10 have considered suicide at some point in their lives.

Of every 100 people who talk about wanting to end their lives, one will actually do it.

That’s roughly one death every 40 seconds.

All of this puts suicide in the top 15 causes of death globally (at number 15 to be specific).

And for every adult who died by suicide, at least 20 more made attempts.

Oh and by the way, although women make more attempts than men, more men actually kill themselves. (Partly because men are more likely to use violent methods.)

And the commonest ways people take their lives are hanging and poisoning themselves with pesticides.

There are those who think it’s all those “silly young folks” that take their lives. But across the world, here’s the reality (2012 figures)…

(By the way, just in case you missed it, those two age groups combined — 15-49 — represent the most economically productive in most nations.)

There are also those who think of suicide as a “rich people” thing. Well, get this…85% — more than 4 out of  5 —of all suicide deaths worldwide occur in low-middle income countries (that includes our dear Nigeria, by the way).

(Yes, I’m aware there are those who would use that to argue that it’s a “poor people” thing, then, but if you consider that lots of poor people go right on living, then you see that we have to still identify what it is that makes some of them who decide it’s enough. Long story short, it’s just not that simple.)

Speaking of Africa, data is pretty hard to get ahold of around here. Statistics on suicide are available for only about 15% of African countries, while data on attempts exists for less than 20%. That said, there’s an estimated 34,000 suicides every year across Africa, and Nigeria is estimated to have about 43 suicides per million people each year (although between you and I, that’s almost certainly grossly underestimated).

But, you might wonder, how exactly does suicide become an option?

One of the biggest challenges with reducing suicide rates is that, it’s a very complex thing, and often involves a bunch of factors coming together: psychological and biological, social and cultural and environmental. To kind of make that worse, even though a many of these factors have been identified, predicting it is still difficult. We know the things that add up to cause it, but we can’t say with any confidence who will or won’t do it.

We do know some things, though.

We know the strongest risk factor is a previous attempt at suicide.

We know that mental disorders (especially depression and alcohol use disorders) are a major risk factor for suicide.

We also know impulsivity is a key factor, and especially in people who have just experienced life crises.

And we know that what kinds of things can happen to a person to make them more likely to consider suicide: conflict, disaster, violence, abuse, bereavement or loss, and isolation.

Speaking of isolation, we know that groups who experience discrimination have higher suicide rates. That includes prisoners, refugees and migrants, and LGBT persons.

So yeah, you know quite a bit. What can you do, though?

A useful way to think of suicide is not as an event, but as a spectrum. This is very helpful because, thought of as an event, there’s little we can do about it once it has happened — suicide is final by definition. But as a spectrum, we can identify that someone is being suicidal long before an attempt the spectrum and it’s useful to think about how to help them turn things around. 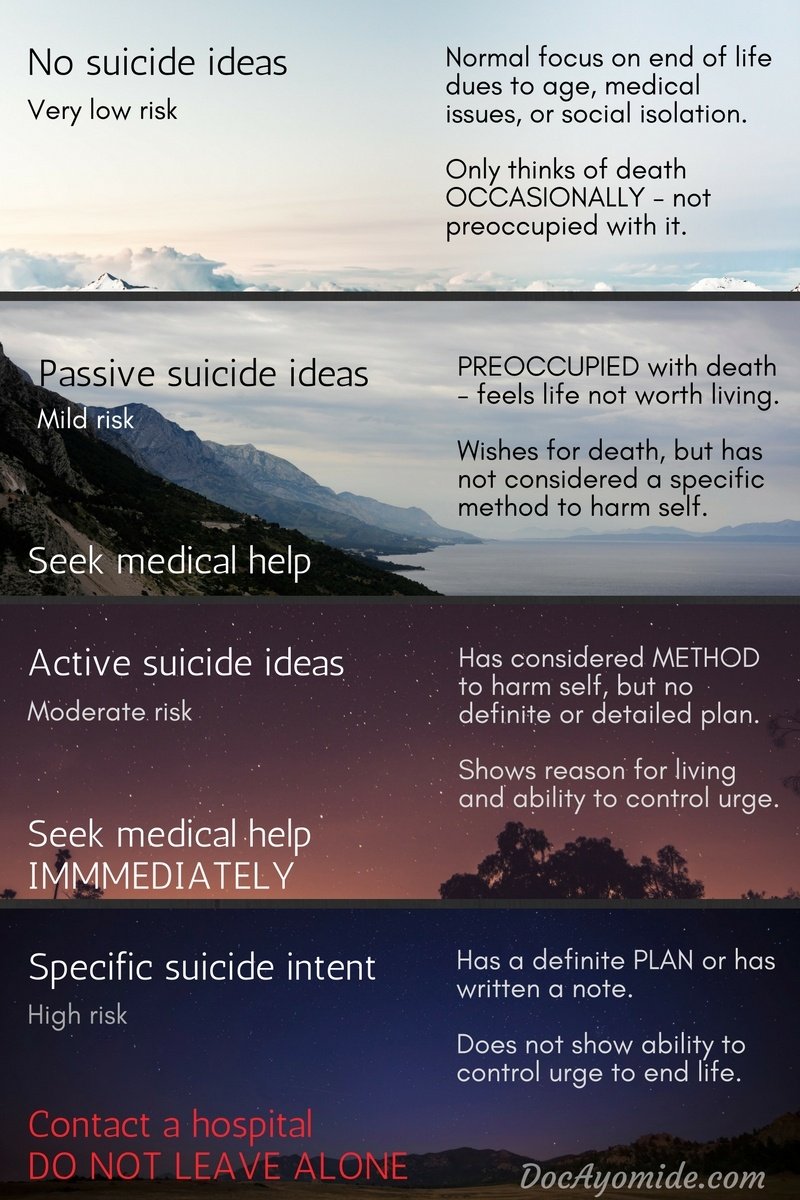 Keep in mind that on one level, anyone can be considering suicide, and so we really need to get rid of this idea that certain kinds of people don’t.

So here’s how it breaks down, from low to high risk.

Someone who has experienced the risk factors for suicide should be considered as being at low risk even if they have thoughts of death, as long as those thoughts are occasional and the person still generally feels they can get over their situation. In other words, it’s pretty normal to think of death from time to time when things get tough. The problem is when the thought starts to become the main thing the person thinks about.

We can say there’s at least mild risk of suicide when the person starts to think more about death. At this stage, they are not thinking about ending their own life, but the idea of death is starting to seem appealing. At this stage they can be described as being passively suicidal.

Almost everyone of us knows someone who has gotten to this point in their lives. There may not be any actions or specifically suicidal behaviour at this point, but they talk a lot about death and dying. This is where you hear people say things like…

(Note: sometimes people just say things like, “Life don tire me,” and they don’t mean anything really serious, just that they feel like a could use a break. But it’s better to take them seriously first and gently ask them to share what they are going through, than to just assume there’s nothing to it — and maybe there really is. Better safe than sorry.)

Now here’s the thing about this level: this is when you should get a medical evaluation. This is the best time to identify what the underlying issues are for this person and get help for them before they become more overwhelming than they already are. This is NOT the time to be thinking about simply giving them a “good talking to.” This is the time to get professional help.

At this point, things are starting to get serious. The person is starting to actually consider suicide: not just dying but ending their lives by themselves. This is where they may say things like…

“I’ve thought of taking my pills, but I can’t bring myself to actually do it.”
“I’ve imagined hanging myself, but I’m afraid of going to hell.”
“I’m tired of life, but it’s like life isn’t tired of me. I might just end it all myself.”

A person at this stage needs to see the doctor, and pronto. Again, don’t downplay it. I repeat: better safe than sorry.

Here, the person isn’t just considering. They have a plan. Or they don’t have a plan yet, but they’ve already decided to end their lives, and are just thinking about how to actually do it. If you ever see someone…

…leave a note,
…buy the pills (or poison) they plan to swallow
…hold knives or other dangerous objects (even if they haven’t used them yet)

…then don’t even deceive yourself — this is the level they are at. I deliberately used the words, “don’t deceive yourself,” because in my experience I’ve often come across people who see someone at this level and think they can simply scold them and that would be the end of that.

Please, I beg you, anyone at this stage is facing something WAY more serious than a scolding can address. Such a person needs to see a doctor sharply! And not only that, you must be careful NOT to leave them alone, in case the urge comes suddenly.

We can all play a part in reducing the likelihood that those we love will get tired enough of life to end it, and what I just did was give you a way to know when to act.

Now go save a life.