The tale of Tamedo: an inside look at a streetperson with mental illness

As a psychiatrist, one of the commonest things I find (besides people wondering why I chose psychiatry) is that a lot of people often think mental illness is “out there.” Something that happens to white people. Or rich people. Or people with nothing better to do. Or people who abuse hard drugs.
Wrong. Wrong. Wrong.

The truth is, many times, mental illness is right under our noses, but we miss it because we’re expecting something big, bad and ugly. Consider for a moment that, with 1 in 4 people worldwide having a mental disorder, chances are you yourself have a friend living with mental illness right now — and you don’t even know. Worse, he or she might not know either.

The goal of this series is to change that. I want to shine a light on mental illness. It’s a blind spot in our health landscape. But like all blindspots, recognising that it’s there is a start.

My focus today is on a very common image of mental illness. The one we all know. Yes, I’m talking about that image you are probably thinking of right now.

It’s the image that looks something like a man I once saw on the road. He was wearing a dirty shirt, little more than a rag, that looked like it might have been white once upon an age. No trousers. He looked to be in a world of his own, accentuated by his continual mumbling to himself. Passersby gave him a generous berth. 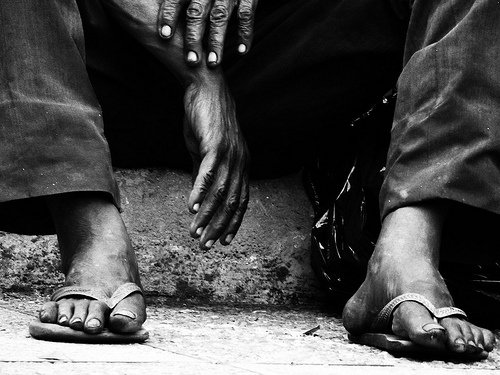 You have almost certainly seen this man before. I don’t mean exactly him of course, but someone like him. Or it may have been a woman you saw. It might have been near your home or office, your church or mosque, or even on your daily commute. It may have even been a brother, a sister, a friend, a cousin. One thing that is for sure is that this is no stranger.

Now let’s get to know this man a little better, shall we? (We’ll assume he is male for today’s purposes.)

First, let’s give him a name: Tamedo. (That, by the way, is sort of a Yoruba equivalent for “John Doe.”) I’ll offer a likely history for him based on the composite stories of many such people I’ve personally known or treated.

So let’s assume the particular mental illness Tamedo has is the one known as schizophrenia. (That’s one of the likeliest forms of mental disorder that can cause a person to end up on the streets. You can read up more about schizophrenia; the link also includes a free test to check if you or someone you care about may need to see a doctor about the possibility of having schizophrenia).

The point is it’s not every mental illness that can lead to a person being in Tamedo’s situation. Most won’t, in fact. That includes nearly all anxiety disorders (which isn’t one but a group of disorders), and most depressive disorders (another group), each of which is far more common than schizophrenia anyway.

(Of which schizophrenia too is a group of disorders, including the paranoid, hebephrenic and simple types. If you want to know more about those, you’ll find links on the article I linked to earlier. I’ll post the link again at the end of this.)

But back to Mr Tamedo.

There are some deductions we may reasonably make about Tamedo based on what is known about his particular mental illness.

Tamedo has likely had this problem for years, because by the time a person with a disorder like schizophrenia takes to the streets, the illness is usually at an advanced stage.

He may have been hearing voices of people he couldn’t see. Those voices aren’t evil spirits. They’re actually his own thoughts being projected to him as voices, which is why no one else hears them — because no one hears your thoughts.

He may have had unusual beliefs of being in danger, or of being referred to or the TV or radio, or being monitored via mobile phone or the internet.

Or he may have had what we psychiatrists call “negative” symptoms, like reduced social interaction, reduced personal hygiene and grooming, or just a general loss of motivation to achieve, leading to reduced performance in school or at work. (Schizophrenia, and other mental disorders, is one reason why a good student may suddenly — or gradually — start doing very poorly in school.)

Of course, these symptoms would have gone unrecognised, since at this stage there’s little of none of the violence that is often (and wrongly) associated with mental illness. Tamedo wouldn’t have been identified as having problems until things had gotten pretty bad. And even then, if he was from a typical Nigerian family, he would have first been treated with traditional medicine or by spiritual or religious means.

When that didn’t work his case may have been considered serious and he may have been taken for a “stronger” level of spiritual or traditional treatment. It is unlikely that he has been to a hospital, but if he had, it probably was not regular. (By the way, patients who are brought for psychiatric treatment are coming from religious homes, and not the other way around.)

And at some point Tamedo may have started wandering: just leaving home for nowhere in particular. For hours at first, and then for days on end. When this started, his family may have kept going to search for him to bring him back home, but the day came when they never found him again. Or maybe they stopped searching.

And he has been on the streets since.

But you know what? Tamedo shouldn’t ever have gotten to this. Some basic treatment could have helped him. And the treatment is available, right here in Nigeria. And it’s not even that expensive. (At their cheapest, medications for schizophrenia are cheaper than those for hypertension or diabetes or HIV.) Tamedo could have been a functioning member of the society.

Actually he still can. If he is able to get treatment.

And yes, I’ve actually seen this happen. I’ve seen people brought in from the streets reunited with their families and become functional again, even to getting jobs. All it took was the right medical treatment. (Although, like I said earlier, with his illness at an advanced stage, his response and recovery may not be as good as if he had gotten help early.)

So what can we take away from all this? Basically this: mental illness, even the serious kind that leaves people on the streets, is not the end. It’s only a kind of illness after all. And it can be treated, like most illnesses. And if he’d had the luck to have started treatment early and regularly enough, he could today be no different from you or me.

Or, even if he started treatment late, he could at least be off the streets.