What to do if someone you know has schizophrenia

In my last couple of posts, I talked about what schizophrenia is, and how you can recognise it in yourself or those you love. In this last post in the miniseries, I want to talk about what you can do after a diagnosis of schizophrenia. (If you haven’t read the previous posts, you might want to go back and check them out first. Don’t worry, they open in new tabs, so you won’t lose your place here.)
One more thing before I continue. I will be talking in this post about two sets of people: people who have gotten a diagnosis of schizophrenia and those for whom it’s a loved one who was diagnosed. Of course you’re welcome if you’re just interested in knowing more about how to help someone. 🙂

Know that you are not alone.

This might be one of the most important things to know. It’s not going to make the schizophrenia better, but it will definitely make you better able to handle to handle it.

The truth is, the chances are pretty low that anyone in these parts getting a diagnosis of schizophrenia will know anyone else who has schizophrenia. Which is not surprising because schizophrenia is not something people talk about over a drink or two. (“Hey guys, you won’t believe who just got diagnosed with schizophrenia!”) Which in turn means that people might have family members with schizophrenia and not even know. (And yes, that isn’t theoretical — it actually happens.)

If you have schizophrenia, or someone you care about does, you are not alone.

Now I’m going to assume that the diagnosis was made by a doctor, preferably a psychiatrist, which means you are already receiving some form of medical help. But beyond that, you totally need to educate yourself about the diagnosis.

Knowledge is power, they say, and it’s true. If you or your loved one are going to have a solid chance at rising above schizophrenia, you better know what you are up against. Pull no punches. Thank God for the Internet, there’s probably way more information out there than you know what to do with (although you have to be careful to focus on trusted sources — there is also a lot of rubbish out there).

You can’t know too much about it. Find out about schizophrenia itself, about the drugs (both the ones you’re being given and the ones that are available), about what else can be done. Ask tons of questions. (To get you started, I’ve linked to some great resources at the end of this post.)

Medication is major in treating schizophrenia. In mental disorders like depression, talk therapy is an option that can be used in addition to medication, but in some cases talk therapy without meds is works well.

Not so schizophrenia. There is definitely a place for talk therapy and other methods of treatment, but they are mostly in addition to meds, not to replace them. Why am I going on about this? Because you don’t want a relapse. Why? Because a relapse (a return of the symptoms after they have gone away):

And guess what is the biggest reason why relapses happen in people with schizophrenia? Yep: stopping meds.

You can’t afford to play with meds in schizophrenia.

Rising above schizophrenia is not a one-person effort. It’s something a person does by themselves. Wherever you find someone who has risen above it, chances are, apart from their medical team, that person is surrounded by a close support group: close family and friends, work, religious or other social community. And if you or someone you love is diagnosed with schizophrenia, one of the first things you want to do is identify your support group.

If it’s you who are diagnosed, you want to think about: who around you can you trust? Who do you know has your back, no matter what? Who can you discuss your diagnosis with and you feel they won’t treat you badly because of it? For work (or school), it’s especially helpful to have at least one person who understands what you are dealing with and is willing to support you, whether a colleague or a superior. But identifying such a person is easier said than done, and disclosing your health issues to the wrong person can seriously complicate things.

If you are supporting a loved one, you want to be there for that person, and let them know you are totally with them. This is even more important because in people with schizophrenia who still have active symptoms, apart from the distress they are often experiencing (remember the story from my first post in the series?), they may be suspicious of loved ones. At times like that, reassurance that you are on the person’s side cannot be overemphasised. Just as important, if you are supporting someone, you want to be sure to take advantage of support for your own self.

Recognise the signs of relapse.

There’s an old Yoruba proverb that translates thus: “A child who stumbles continues to look ahead; but an elder stops and looks back.” In other words, when something goes wrong, a mature person takes the time to consider and learn from it. This is a key principle to keep in mind in dealing with long term health conditions, and it is no different with schizophrenia.

One of the most important things a person can do is to know what signs indicate the beginning of a schizophrenic episode, and these vary from one person to another, so each person must identify the unique pattern for themselves or their loved ones. This is not so you can say to the person, “You’re starting again, abi?” but so you can genuinely help them. The key is to help, not to attack. (In fact, reacting emotionally to someone with schizophrenia, especially with criticism, hostility or over-involvement is almost a sure way to a repeat break down.)

This isn’t exactly something you can do, but something you should know: because knowing it will empower anyone to give their best to make everything I’ve said actually happen. We all give our best effort when we are sure that it’s going to count for something.

The good news is we can all help to increase the chances of being in the first group, or at worst in the second. And one of the most important things we can do to make this happen, besides everything I’ve said so far, is really to get to help as quickly as possible. The longer it takes to get help the harder it will be to achieve full recovery.(Even then it’s not impossible, just that the chances are less. And you want to get the best chances for yourself or your loved one.) That’s why it’s tragic that so many only get medical help after months (sometimes, years!) of failed “treatment” in traditional and spiritual centres (including churches and mosques). Thankfully, this is changing, as people at some of these centres now refer people to hospitals, but it’s not changing fast enough. 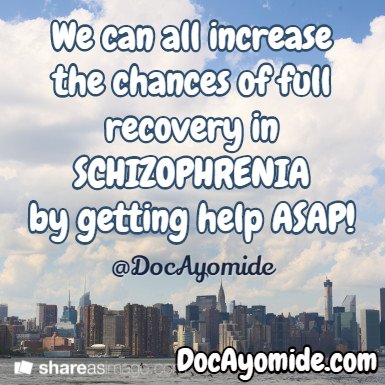 If you take only one thing away from all I’ve said, let it be this: we can all significantly increase the chances of full recovery in schizophrenia by getting help as early as possible.

Finally, a few resources to get you started…