Did you know World Suicide Prevention Day was 5 days ago? No? Well, now you do. It’s September 10 every year, and in commemoration of this year’s WSPD, this post and my next few posts will be a short series on suicide.
Where were you when you heard of the death of Robin Williams’ a month ago (11 August, 2014)? When you heard that it was a likely suicide, what was your first reaction? Mine was sadness, for this wonderful man who had given the world so much, and all while struggling with something many cannot understand.

Williams was one of those people whose death couldn’t but be a shock, because you never actually expect them to die — you just don’t want them to, and somehow never actually think of the possibility of their dying. But it was doubly a shock when the way he died came out. And it brought to the public eye once again, the issue of suicide, what is behind it, and what we can do about it. 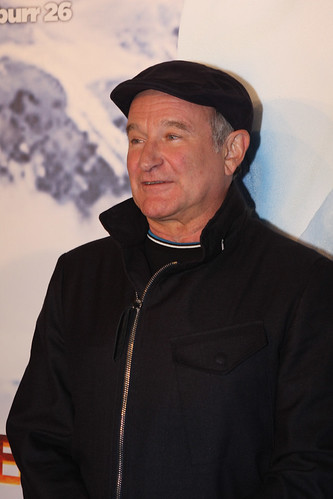 You’ve proably heard some of these reactions.

But like all questions, these ones too reveal something of how we think about suicide.

So what exactly is suicide anyway?

Suicide is when someone intentionally causes their own death. It’s from the Latin word, suicidium (from sui caedere, “to kill oneself”), and it’s important not to confuse it with self-harm, which isn’t necessarily the same thing. (More on that in a later post in this series.)

Suicide: “The act of killing oneself deliberately initiated and performed by the person concerned in the full knowledge or expectation of its fatal outcome.” — WHO

And contrary to what many think, suicide isn’t something done only by people tired of life. Nor is suicide foreign to Nigerians, Africans or Blacks in general. It’s rather more complex than that.

Nearly 1 million people (officially 800,000 but very likely more) take their lives every year. Those who attempt to are even more.

[bctt tweet=”One suicide occurs around the world In the 40 seconds it might take to read this.” username=”DocAyomide”] 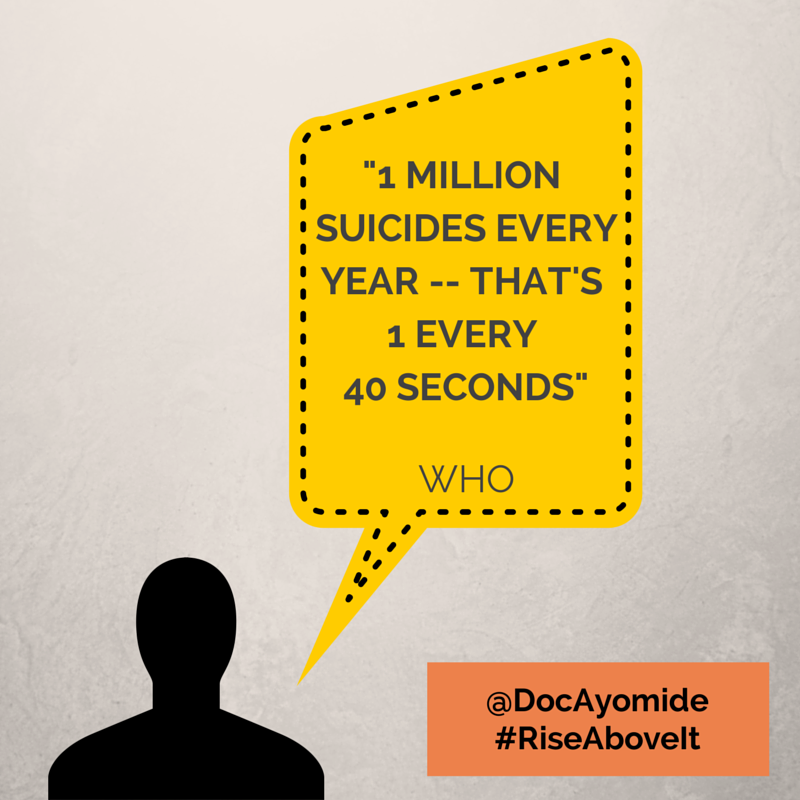 For every adult who dies by suicide, there are about 20 more attempting it.

On average, more lives are lost each year through suicide than from murder and war combined!

Suicide is seen in all age ranges, from very young to very old.

In 2012, suicides were #2 cause of death among 15-29 year olds and #5 among 30-49 year olds globally. To grasp the seriousness of that, consider that those two age ranges represent the most productive years of most people.

“Suicide is a global phenomenon in all regions of the world.”–WHO

In 2012, sucide was the 15th leading cause of death around the world, accounting for 1.4% of all deaths.

Also in 2012, 3 of every 4 suicides worldwide were in the low- and middle-income countries — it’s clearly not a “rich people’s problem.”

You might wonder, though, if it’s so common in less wealthy countries, how come we don’t hear of it so much? The most likely reason? Under-reporting. The richer countries are also the ones who keep regularly updated records. For instance, right here in Africa, less than 10% of countries provide WHO with mortality records (deaths and causes of deaths). A lot of info is based on estimates. Here’s a statement from the WHO themselves:

Some countries do not report mortality data to WHO… In many low-resourced countries, the cause-of-death information is difficult to obtain, mainly because the system for recording such information is not functioning or inexistent.

When cases of suicide are reported and people say things like, “Suicide is becoming more and more common,” you have to wonder if it’s really that or it’s being more accurately reported. Or when people say suicide is not an African thing, you have to wonder about things like the fact that Sango, the Yoruba god of thunder, is said by some accounts to have died by hanging himself. (Sango worshippers deny this, but the point is, the sheer existence of that belief is proof enough that suicide is no foreign concept to the culture.)

Section 327 of the Criminal Code provides as follows: “Any person who attempts to kill himself is guilty of a misdemeanour and is liable to imprisonment for one year.”

Yup. That’s because suicide is considered to be an offence against the state. You know, of course, that our law derives from old British law (although theirs has been updated since 1961 as far as suicide is concerned), which is, in turn, has roots in old Roman law which made suicide an offence because of its economic costs to the state.

In fact it’s this historical criminalisation of suicide that gave rise to the term, “commit suicide.” You know, like how a person might commit murder, or some other felony. It’s also why the name is “suicide” — like homicide or patricide or infanticide, all legal terms.

[If you’re wondering how more sensitively to describe it, we could simply say a person killed herself, or took his own life. Of course, to say, as some do, that a suicide attempt was “successful” is just wrong. Better to say it was completed. And remember that some people aren’t so much trying to take their lives as much as intending to harm themselves; that’s “deliberate self-harm.”]

But what’s really going on when a person takes their own life, or attempts to? What makes people even seriously consider things like that?

Why suicide? How do people reach the point of taking their lives?

First things first, you should know that suicide isn’t something that happens easily. There’s a reason why it feels so terrible and wrong, and that’s because, on a deep level, it goes against our own instincts. Many who take their lives have had it in mind for a good while, or experience sudden and strong impulses, or both. And many who attempt it feel remorse after the attempt.

So what are the factors that make a suicidal attempt more likely?
– A previous attempt. This is the strongest risk factor by a long shot. A person who has made an attempt to end their life is very likely to try again. But this, too is preventable, and I will discuss that later in this series.
– Depression. Depression is perhaps the most significant risk factor for suicide. Find out more in my series of posts on depression.
– Alcohol dependence. This is something I will write more about in the future. Suffice to say now that people dependent on alcohol are established to be more likely to attempt and complete suicide.
– Schizophrenia and other psychotic disorders. In these kinds of disorders, people sometimes hear voices telling them to carry out actions that may end in them losing their lives. Sometimes they may not even realise the import of these actions at the time. (Of course, in our culture, the first likely thought would be to think that ther must be evil spirits at work, but the fact is there are people with illnesses like this who get better with medication. If it really was due to evil spirits, should medication work?)
– Impulsivity. In crisis moments, there can be a sudden breakdown in the ability to deal with life stresses, such as financial problems, relationship break-up or chronic pain and illness. This is sometimes what happens when people say a person ended their life when they were jilted.
– Other risk factors. Violent conflict, disasters, abuse and loss are strongly associated with suicidal behaviour.
– Vulnerable groups. People who face severe discrimination and isolation, such as refugees, immigrants, prisoners and gay or lesbian people are also at risk.

Suicide is not out there

Suicide is a real issue, and it affects real people. It’s not a white man’s problem, but affects Africans, and Nigerians as much as any other group of people. It affects the poor as much as the rich, the young as well as the elderly.

In my next few posts, I will be presenting more facts and figures research on suicide in Nigeria and Africa. I’ll also be talking about what you and I can do to help people who are considering or have attempted suicide, and people grieving the loss of someone by suicide. And I will talk about self-harm, too.

This is the first of a short series of posts on suicide, in commemoration of the recent World Suicide Prevention Day (September 10 annually).