She pushed the door to her room open, locked it behind her. It wasn’t really her room: she shared it with her younger sister. But Modele was in school, and she was grateful to have it to herself for the moment.

This sucked. She felt like her life sucked. She hadn’t asked to be mentally ill, hadn’t asked for a diagnosis of schizophrenia. She hadn’t chosen to hear voices nobody else could, hadn’t made a life plan that included losing jobs and relationships because of crisis episodes.

And she was trying to cope with it all, to chart a path for herself through the unplanned challenges that came with being mentally ill. But when her own family started to bring up her illness every time she raised her voice? No, that was simply too much.

All she had done this morning was get upset with her mum for monitoring her like she was a child. Asking about her medications, checking up with her doctors to know if she went for clinic appointments. And this morning, threatening to stop her from going out when she wanted.

It wasn’t like she didn’t get that it was because they cared, but sometimes it was just too much, and when she got upset they acted like it was normal that at 27 she was still being treated that way. Like she was happy with the way things were.

Have you ever felt like Sade did? No, I’m not asking if you’re mentally ill, just if you have ever felt the way she did: being treated like your opinion doesn’t count.

If you have, take a moment to imagine what it’s like for a person to be in that headspace for long periods of time, of their life. That’s what people with problems others don’t understand often have to deal with. And yes, that includes people with mental health problems.

It all comes down to the issue of dignity. Or respect. Or self-worth. Dignity means feeling like you mean something, like you matter, and having other people actually treat you like you do. We all want to be treated with dignity — and we deserve to be. It’s such a big part of living meaningfully that people have, in some cases, chosen rather to end their lives than face indignity.

And dignity is the focus for this year’s World Mental Health Day because a mental disorder can often mean people taking over some of your decisions, even if it’s only for a while. Except that “a while” can last way longer than you think it should, and then it’s like they’re basically trying to run your life. (Which, by the way, sucks as you get older.)

For some people living with a mental disorder, Sade’s story is everyday life. 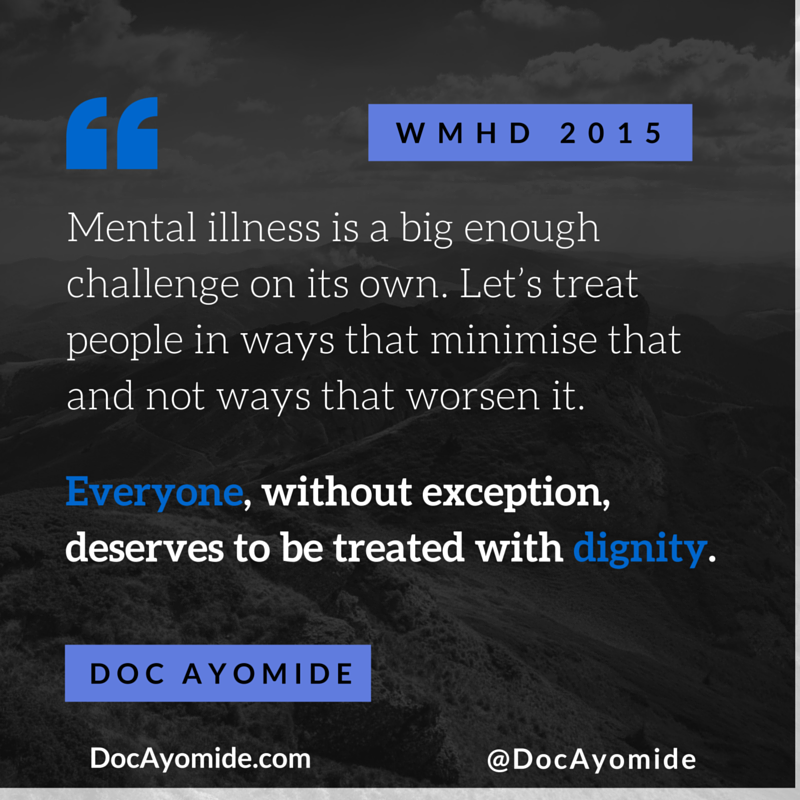 It’s been said: “Symptoms are not a barrier to recovery, but attitude is.” And that’s so true. Our attitudes can easily create bigger problems for people with mental illness than the illness itself does. Imagine how it would feel if you constantly had to prove yourself. If you constantly had to demand respect, when others around you could take it for granted. If you couldn’t even be upset without explanation.

Those are just a few ways dignity can be threatened. I’m sure you can imagine a few more. The point is, the way we treat people matters. And the closer we are to them, the more our attitude matters. And treating people with dignity can make almost as much difference as medical treatment. Maybe even more.

Mental illness is a big enough challenge on its own. Let’s treat people in ways that minimise that and not ways that worsen it. Everyone, without exception, deserves to be treated with dignity.

Do you know someone with mental health problems? How can you treat them with dignity today?

For more information about how to support people with mental illness, and an approach to mental health first aid, check out this post. (If the link isn’t showing properly on your device, you can copy and paste it into your browser search bar.)